THE BALLAD OF LEFTY BROWN 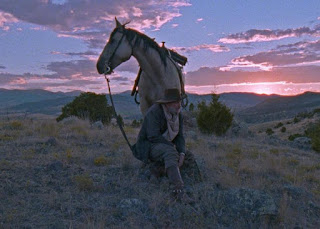 After years of being overshadowed by his friends and considered to be a little dim, Lefty (Bill Pullman) is being left in charge of his life-long friend Eddie’s (Fonda) ranch in Montana.  He is intimidated by the prospect, and tries to refuse, but Eddie insists, and gives him what looks like his own very special gun.  Eddie is on his way to the Senate in Washington, D.C.  His wife Laura (Baker) is not happy at all about Lefty being in charge, and also tries to talk her husband out of it.  Just before they’re scheduled to leave, though, ranch hands notify Eddie that three of his horses have been stolen.  Not heeding his wife’s pleas to take a crew of men with him, he takes off with only Lefty to pursue the thieves.  There is a tragedy, and Lefty is determined to avenge his old friend, despite seeing himself as “a man who never got anything right in 60-odd years.”
What follows is in the tradition of westerns in general, when individual citizens take it upon themselves to mete out justice however they see fit.  There is some talk of legal trials and judges, but it’s often only given lip service.  On the contrary a man might be hanged on the spot after a few decide he’s guilty.  One of the reasons Lefty doesn’t quite fit into the community is that he seems to be a pacifist.  He works very hard not to kill someone he’s captured—a rather odd motif in a western movie.  This offsets to some extent my revulsion in seeing the ubiquitous gun-toting cowpokes take matters in their own hands, especially when at one point people have decided that Lefty himself has committed a major crime.
Four men in town have been friends for many years.  Jimmy is the governor of the state; Eddie is a highly respected rancher with Lefty as his sidekick, and Tom is the U.S. Marshal.  The drama has twists and turns, shoot-outs, and a young man showing up with romantic notions of the wild west and burning to be a part of it.  Lefty’s good nature is apparent in his finally relenting to mentor Jeremiah and allow him in the group.  In the end, a major plot is uncovered which is shocking to all involved.
Pullman is the heart of this film and artfully portrays his character as layered; on the surface, just a simple man, but having much more wit and sensibility than he is given credit for.  Some of his best is when he is telling western stories to the young Jeremiah.  Lefty seems always to have been in the shadow of his more dominant friends.  Jim Caviezal’s character is likewise an interesting inclusion into a western as a suave, literature quoting mannered man.  He, too, seems out of place in such a town, like Lefty, although for a different reason.  Tommy Flanagan and Kathy Baker deftly play characters who are not so admirable or thoughtful.  A refreshing part of the story is Diego Josef’s character, Jeremiah, who is earnest and a typical teenager just learning the way of the world and eager to make his mark.  I wish more of his story had been included; we’re never informed about why he is out in the wild on his own with no horse after his got bitten by a snake and had to be put down.
Writer/director/producer Jared Moshe’s background is primarily as a producer, but his Ballad is engaging, beautifully filmed (David McFarland, cinematographer), and has a few twists in what is basically a traditional western.

A ballad for a man who finds himself later in life and can be proud of what he proves.

Posted by donnarcopeland at 12:00 AM