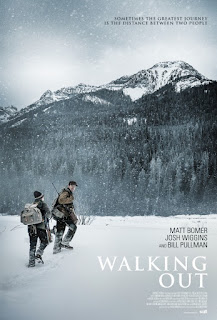 Father-son bonding movies are usually well received, especially when they occur after a period of estrangement.  It’s clear when David (Wiggins) arrives at the airport on a snowy day in Montana that he is a bit uneasy.  His father Cal (Bomer) doesn’t seem to notice; he is much more enthusiastic about the visit and seeing his son.  He tells David excitedly about his plan to take him moose hunting, and just maybe David will get his first moose.  This was a milestone in Cal’s own life, which he relates to his son, reminiscing about the time he spent with his own father.  The spoken memories are enhanced by showing videos of him as a youngster (played by Alex Neustaedter) with his dad (Pullman).
We eventually learn that David lives with his mother in another state; she couldn’t take the Montana weather, and left his father.  Cal’s ties to the land (and he owns a large parcel) are so strong, he couldn’t possibly think of living anywhere else.  David is clearly from the city, and knows little about what most boys from the country learn in terms of skills in camping, hunting, fishing, etc.  Not only that, he appears to be rather reluctant to go on a hunting trip and would rather play games on his telephone.  He’s a bit squeamish about killing animals anyway.  When Cal realizes this, he is sorely disappointed, but gives David the choice of not going.  Of course, that’s accompanied by the threat of sending him back to his mother and the knowledge that he has let his dad down.  This gets through to David in a flash, and he decides he’d rather go hunting.
Eventually, Cal lets go of his macho front and becomes a very good teacher on hunting in the wild, such as what to do if a bear starts chasing you, and how hunting is different from killing an animal for anything other than food.  He accompanies this with his childhood stories, which David seems eager to hear.  The meat of the film is when two life-threatening incidents occur, and we see how the bond between the two has become strong enough to support them during the rest of the trip.
It’s a coming-of-age story for David who will never be the same afterwards.  Usually, I want movies to be shorter rather than longer, but I wish this one had shown more about David’s transformation and his reunion with his mother.  Nevertheless, it’s a skillful rendering of father-son bonding in the wilds of the breathtaking snowy landscape of Montana.
Bomer and Wiggins capture the father-son relationship so well, and the backdrop of Montana in the winter (Cinematographer Tood McMullen) is exquisite.  In this age of serial relationships among adults, I wonder about if many teenagers would find this story helpful in identifying and bonding with their fathers.  I also applaud the filmmakers for not shying away from depicting a very sensitive subject.

An unnerving and heartfelt bonding of father and son hunting moose in the wilds of snowy Montana.