THIS IS YOUR DEATH 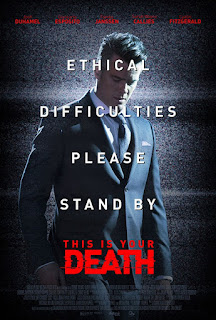 The plot of This is Your Death is set on a topic that is both intriguing and horrifying—unconscionable, some would say.  The intriguing part is related to the issue of a person’s right to choose their own death, which has advocates for both pros and cons.  The horrifying aspect is a TV reality show setting with an audience to hear the person’s back story and witness the suicide itself.  The acceptability of this practice is rationalized by explicitly identifying someone—like a child—who will benefit from donations made in the person’s name.  And these come in by the hundreds of thousands of dollars.
This idea is conceived by Adam Rogers (Duhamel) who was host of a previous reality show in which a tragedy occurred.  He expresses his guilt about that show, which he felt responsible for, in that he was “pitting two women against each other like dogs.”  He convinces his producers and managers of the charitable benefits that he says will justify the new show, saying that it is not a death show, but “life affirming”.  His arguments reveal a kind of “skewed morality” that smack of truth, but are really flawed.  Of course, the studio brings in attorneys to assure they are above the law, and it has a physician on site who will verify that the person is in their right mind.  It’s a requirement, of course, that the person complete the act on their own.  They can choose the means by which they do it.
Among those we meet are a woman abused by her husband who wants to be sure her daughter will be well cared for; a man who is terminally ill; a woman who wants the donations to go to refugees; a man whose wife needs a heart transplant, which he can’t afford; and a hard working older man who keeps getting fired and cannot get another job.  He wants to help his wife and two children, one of which is on crutches.  We witness mixed audience reactions, but the donations pour in, and Adam has to keep upping the stakes.
As time goes on, we see the binds that develop for Adam and the producers to keep the show a hit and deal with unanticipated problems.  Moral outrage increases, and Adam develops a reputation as “the televangelist of death.”  One woman highly outraged from the beginning is his sister Karina (Callies), an oncology nurse on a pediatrics unit, where everyone knows Adam is her brother.
The film starts out being interesting in highlighting the reasons people want to participate, but misses the opportunity to explore the topical subject of suicide, shifting instead to Adam’s increasing problems in keeping the show ratings up and his obsession with his career and popularity.  As it becomes more unrealistic and sensational, This is Your Death loses its appeal and becomes just another TV reality show.
Director Giancarlo Esposito’s career has been primarily as a television actor, and he plays a strong role as one of the characters wanting to help his family.  Duhamel, Callies, Janssen, and the other actors do a creditable job in portraying the conflicts inherent in such a rather outlandish production.

A sometimes shocking story about a bizarre television reality show.

Posted by donnarcopeland at 9:54 AM