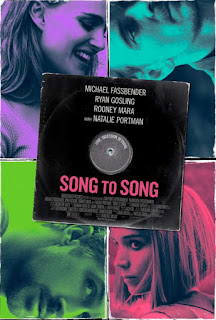 This is a love story about one couple, but generalizes to a broader inclusion of people in general and the natural world.  It’s an Impressionist painting, with story, song, and photography artfully expressed.  Malick has a photographer’s eye that doesn’t follow along the usual frame of plot line, but he gives us impressionistic glimpses of people’s lives and the meanings of it they construct.  Rooney Mara as Faye narrates most of the film, tracing the “dance moves” that made her life what it became.  She starts out as a receptionist for a wealthy man (Fassbender) who is a major force in people’s lives (“people change when they’re around him”, she says).  People come to him as Faye does, hoping he can help them make more of their lives.
But the man, who is some kind of Titan in the music industry, cannot resist exerting god-like control over people he is mentoring, even while exhorting them to “be free.”   Faye ends up having an affair with him, but after a time meets another man in his orb (Gosling).  The three play, cavorting and frolicking, hoping that it will last forever.  “We thought nothing could break us apart; we made music together.”  Ah, but we are human, and thus in this story the “song to song”, “kiss to kiss” begins, and after betrayal, disappointment, and disillusionment, it finally ends in forgiveness and mercy—at least in one case, which gives us hope.
There are contrasts drawn between the experiences of men and women, people of privilege and those less fortunate, and individuals with varying degrees of insight and introspection.  The women here seem to be more introspective and self-critical, and searching at first for someone like the wealthy man who will complete them, like Faye the narrator.  Her successor (Portman) says to the same man, “What part of me do you want?  Take what you want from me”, unaware of the bargain she made upon first meeting him when she observed, “you have everything, everything I want.”
The men have more of a competitive relationship, and their interests are expressed in that realm, with the mentor abrasively scolding the mentee for not achieving more, and the mentee accusing the other of stealing credit for his work, which could be the undoing of their relationship.  We get few clues or evidence of introspection on their part, except for one’s toward the end.
We get glimpses of those who have come from more modest circumstances encountering the wealth of others, and aspiring to achieve the American dream.  Some are not willing to compromise themselves; others are.  Some learn from their experience and try to change; others are oblivious.  But all experience some kind of regret over the choices they made.
As much as Song to Song is a portrayal of life as a series of dances and songs with varying partners, it’s also a commentary on trust, fidelity, truthfulness, openness, and honesty in human relationships.  Along with the endearing playfulness (Gosling’s character takes this to the max), we’re reminded of the anguish of betrayal and the pain of separation, but as well the possibility of a “new paradise” in forgiveness.
The four talented main actors (Gosling, Fassbender, Mara, and Portman) show their skill in responding to Malick’s rather unique direction, and impress with their delightful athletic abilities in dancing and cavorting through all the scenes showing the blooming of new love.  Blanchett’s brief scenes show her power in conveying deep emotion, and cameo appearances of Bale, Kilmer, del Toro, Hunter, Iggy Pop, and still more, provide additional entertainment and scope.  A most impressive appearance is Patti Smith, singing of her love of the photographer Robert Mapplethorpe and through it, giving sound advice to Faye.
Malick’s teaming with his award-winning partner in cinematography, Emmanuel Lubezki, makes Song to Song a true work of art visually, dramatically, psychologically, and philosophically.

A song of love in many of its manifestations, ending on a high note.

Posted by donnarcopeland at 12:49 AM