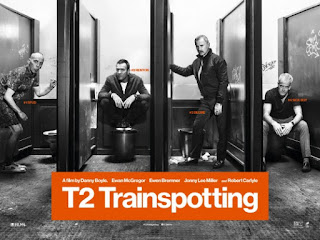 Nostalgia seems to get the better of four old friends from childhood who come together—some by accident—with old grudges still burning.  This is prompted by Mark Renton (McGregor) coming back into town and looking up Spud (Bremner) first, and then cocaine snorting Sick Boy (Miller) to settle a score.  He’s wanting to avoid crossing paths with Begbie (Carlyle), who feels most betrayed by Mark.  Those who saw the first Trainspotting (also directed and produced by Danny Boyle) know why.
Coming across Spud in the midst of a tragic situation, Mark starts using what he learned in rehab to get Spud on a better, healthier track.  He gets enough nerve to pay a visit to Sick Boy, wanting to compensate him for what Mark had done to him.  And although Sick Boy—Simon now—puts up a good front, he plans to do his best to bring Mark down.  He confides in his friend/business partner Veronica (Nedyalkova) of his intentions, and pulls Mark into their business plan of establishing a “sauna”/bordello.  Mark has learned some things about marketing, and the three apply for a loan.
Several themes are woven into the action, one being the relationship between Mark and Simon, with Veronica making it a triangle.  Another is Spud’s taking to heart any advice given to him, and trying boxing, but really ends up writing stories with Veronica’s encouragement.  Interestingly, the stories are based on the four friends’ growing-up years.  Then, there is the pursuit of Begbie, who has managed to squirm his way out of prison, and is intent on bringing Mark down.
The story ends up being rather clever and humorous (if one can ignore the sordid parts), and illustrates so well the ultimate outcome of the characters.  It’s also a sad story, with losers and cheaters (if you want to call them that) getting their due, and clever, hard-working souls coming out on top.
McGregor is still at the top of his game, and his interactions with his old friends (expertly played by Bremner, Miller, and Carlyle) will be of special interest to those who saw and loved the earlier film.  I enjoyed this updated rendition showing the astuteness, sensitivity, and practicality of the Veronica character (superbly played by Nedyalkova), and the reemergence of Diane (Macdonald) as a successful lawyer, reminiscent of the Irish girl-made-good in HBO’s Boardwalk Empire.  In contrast, it’s rather sad to see the lives of three of the old friends have not developed much beyond the sordid existence witnessed in the original story.
The cinematic effects and period music in T2 Trainspotting—along with the acting—make this an interesting film to see.  It’s not the best that Danny Boyle (Slumdog Millionaire, 127 Hours, Steve Jobs) has done, but I did hear applause at the end of the screening I attended.

Posted by donnarcopeland at 1:30 PM