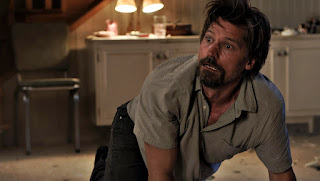 Small Crimes takes us into a town’s corruption and gossip with dirty cops and mafia bosses.  Joe Denton (Coster-Waldau) is just being let out of prison after serving six years for the attempted murder of a district attorney.  He states his intentions to reform, telling the prison chaplain whom he has been seeing for counseling for years that he wants to make up for the past.  Once he’s out, he goes to his parents’ (Forster, Weaver) home and borrows his father’s truck. But after walking past a bar, he retraces his steps and goes inside.  Those are fatal steps; in no time at all, he is being pulled back into the old circle of dirty cops and a mob boss, drawing him back into the circle with threats to his family if he doesn’t follow through.  Lieutenant Pleasant (sure!) (Cole) gives him specific instructions on what to do for all involved to avoid reopening a case.  Of course, what to do involves a crime.
Joe makes feeble attempts to do the jobs he is supposed to, but either fails or chickens out.  (It seems that prison experiences did have some effect on him.)  Thinking he’ll get around the problem another way, he makes friends with the mob boss’s hospice nurse, Charlotte (Parker), another maneuver that reveals his lack of concern for his impact on others.  Former mob boss is dying of cancer, has gotten religion, and is talking about turning state’s evidence, implicating Joe and his accomplices.  The man has to go, says Lieutenant Pleasant.
The film is good at showing how someone being released from prison has a very difficult time reintegrating into society and the influence past connections have on the process.  And as we see Joe trying different means of squirming out of the situation, we’re also aware of his lack of perspective and sensibility about the overall picture.  In other words, the film ends up not having much of a point about what it is portraying.  This brings to mind the question of the title, Small Crimes, which actually refers to something much heavier:  murder.
Coster-Waldau is a fine actor, as we’ve seen in HBO’s Game of Thrones, but this script by the director E. L. Katz and screenwriter Macon Blair (the latter influenced by Jeremy Saulnier of Blue Ruin and Green Room) doesn’t have enough creativity to exploit his talents.  Molly Parker, Gary Cole, Robert Forster, and Jacki Weaver provide excellent supporting talent, but they are also let down by the script, which doesn’t have what it takes to be a major work.

Small Crimes ends up being small potatoes in moviedom.


Posted by donnarcopeland at 10:09 AM