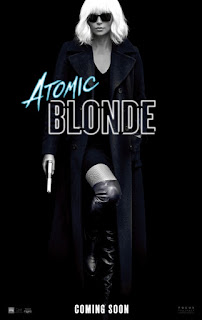 Atomic Blonde—an intentional play on the name James Bond—is a spy thriller that takes place toward the end of the Cold War, just before the Berlin Wall is torn down.  But British MI6, with Gray (Jones) in charge has one last puzzle to solve.  One of the MI6 officers had obtained a vital list of double agents who were being smuggled into the west, but he is killed, and no list is found on his body or his belongings.  The CIA (Goodman) is called in to help evaluate the situation by questioning British agent Lorraine Broughton (Theron) who was sent in to locate the list.  The Berlin contact she is to collaborate with is David Percival (McAvoy), the established, well-respected British ambassador in West Berlin.  The film is her account of what happened.  She comes in with black eyes and bruises and scrapes all over her body.
Lorraine is irritated from the get-go, when she is not met at the airport by Percival.  Instead, she is whisked off by some Russians pretending to be British.  The Bond-like blonde immediately grasps what is transpiring and makes quick work of the thugs that involves harrowing combat in a speeding car.  This is just the opening.  Many more astounding feats will follow.
The bottom line of the movie is the advice Lorraine is given by the experienced Percival at the beginning of her sojourn in Berlin:  Trust no one.  She begins to investigate, starting with the dead agent’s apartment and sleuthing out what the Russians knew of her assignment.  In the process, she encounters a mysterious female French agent (Boutella) whose role is only determined across time.
David Leitch (stunts for V for Vendetta, 300, and Mr. & Mrs. Smith; producer, John Wick) has directed a thrilling story written by Kurt Johnstad, which was based on a graphic novel series written by Antony Johnston and Sam Hart.  The story is suspenseful, thrilling, and even a little humorous, and the fight scenes are well choreographed—presumably reflecting Leitch’s stunt experience.
Theron kicks a--, clearly matching her male predecessors’ acumen and sex appeal.  Women will cheer her role as a major breakthrough for female actors.  I found her fighting skills shown to be far beyond that of even well trained women athletes, but that is often true of male actors in this genre as well.  Most audiences seem to like that fantasy, despite its hyperbole.  McAvoy and Goodman show their fine talent in playing ambiguous characters who must be discovered across time.  Sultry Algerian born French actress Sofia Boutella (Kingsman:  The Secret Service, Star Trek Beyond) is becoming known to American audiences, and clearly displays her talent in this film, where her character is thought to be “beyond her depth”, but ends up providing critical information.
Audiences who are drawn to action spy thrillers are likely to relish Atomic Blonde and cheer on the move toward making more women action heroes.

If you’re wishing for a female James Bond, you will love this film.

Posted by donnarcopeland at 11:53 PM