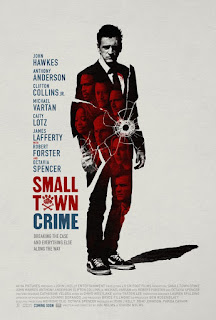 Mike Kendall (Hawkes) is an ex-policeman who was fired from the police force after becoming an alcoholic and using poor judgment in a traffic stop.  He leads a lonely life, once ending up in the bushes off the highway when, heading toward home, spots a body on the side of the road.  He stops, and loads the body, a young woman into his car.  He still has a friendly contact on the force, so turns the body over to him to process.  To his frustration, his friend is unable ethically to give him any information about her.
However, when he gets back in his car, he discovers the woman’s cell phone.  He misses police work so much, he can’t resist doing a little investigation, to the point that, despite his colleague’s warnings and advice he decides to become a private investigator.  With his experience on the force, he easily qualifies for certification.
Now that he has the woman’s name and address, he goes to visit the woman’s parents and grandfather (Forster).  The parents prefer simply letting the police—who had already visited—handle the case.  But when Mike goes to talk to the grandfather, he gets hired because the man is critical of the parents and suspects the girl’s boyfriend, and enthusiastically joins up with Mike.
But this girl will not be the first one to die, and Mike realizes that the young woman was mixed up in a major crime ring involving drugs and prostitution.  The story becomes complex as Mike tries to uncover the truth while needing to sidestep the police.
Mike was adopted as a child, and has a sister (Spencer) and her husband who have been supporting him and trying to get him to shape up.  When they are inadvertently involved in the murder mystery, the stakes become even higher for Mike to be successful.  Plots, car chases, and extreme violence ensue.
Small Town Crime is interesting, exciting and well choreographed by the writers/directors Eshom and Ian Nelms.  Hawkes is his usual captivating character, and Spencer and Anderson add warmth and sensibility to the production.  The first part is too long in detailing Mike’s alcoholism, and makes him an unsympathetic figure, despite his heroics and efforts to reform himself.  When the crime figures enter the picture, the story heats up considerably, especially when the limits to which the criminals will go to protect their assets becomes apparent.

Posted by donnarcopeland at 12:28 PM