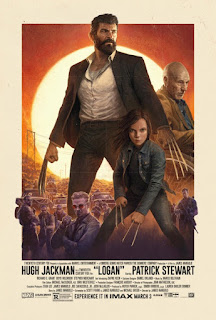 Wolverine (Jackman) looks older and has become a grumpier version of his earlier gruff persona.  He has a persistent cough, but refuses to talk about it or any of the other troubling aspects of his life.  His whole intention at this point is to keep his beloved Charles Xavier (Stewart as Professor X) functioning and get enough money for them to sail away from everyone and live on a boat in the high seas.  The mutant Caliban (Merchant) serves as a houseman for Charles and Wolverine in their temporary bunker-like quarters, and complains about the fact that they are likely to leave him behind.
Charles has apparently become demented and has visions of mutants.  Logan dismisses these, and just wants Charles to take his medicine that controls seizures that are strong enough to make all the surrounding area around him shake like an earthquake.  But there are those who are tracking Wolverine and appear out of nowhere asking/begging for his help, whom he impatiently and brusquely dismisses.
The first person to approach is a Donald Pierce (Holbrook) who represents an illegal bio-engineering company in Mexico named Transegen, which is trying to round up as many mutants as they can find, particularly some recent escapees who were being trained to be soldiers.  Wolverine definitely wants no part of this.  Then there is a Mexican woman with a young daughter desperately seeking his help, but he feels no responsibility and walks away.  You sense his complete weariness and burning desire to get away.
When he does acquire the money for the boat he arrives home only to find a young mutant girl there, warmly greeted by Charles.  “She’s the one I’ve been telling you about”, he says to Logan proudly.  Logan will soon find out more than he wants to know about the girl, Laura (Keen), and why she has turned up at his house.  He will also discover that the Transegen Company is determined to capture as many mutants as they can, no matter what it takes to do it.  They are enraged about the soldiers they’ve “grown” in their facility refusing to fight.
Director James Mangold’s Logan is in the tradition of fine X-Men films with suspense, intrigue, action, and fully developed characters, still with a little humor sprinkled in.  Dramatic elements are more apparent this time; for instance, Charles’ pleas for Wolverine to enjoy himself more as a normal human being are touching.  There is a melancholy feel to this one, the third of the Wolverine series, because Jackman says it is the last Wolverine film he will make.  Apparently, he put his heart and soul into every scene and is pleased that everything about the film that was important to him has been included.
Fight scenes are choreographed artfully; but as in many action movies, I find my sense of logic and reality tested, as when a group of mutant children with special powers are being chased by Transegen’s men, they’re able to use their powers at some times but not others.
Jackman and Patrick Stewart have a lot of chemistry in Logan, showing the older man trying to counsel the younger, only to get a curt comeback. Yet, it’s clear that the two characters have deep affection and loyalty to one another.  Dafne Keen’s Laura becomes a central figure in the film, and she carries it off beautifully, exquisitely portraying herself as a mutant with a penetrating, knowing stare, ferocious countenance, and immeasurable fighting skills.  She very likely has a bright future ahead of her.  Boyd Holbrook and Richard E. Grant deftly portray sinister characters, one with brute force and the other with a chilling demonstration of a researcher gone rogue.

An intriguing and fitting end to the third and last of the Wolverine series.