THE MOST HATED WOMAN IN AMERICA 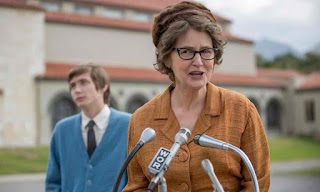 Hatred in America; it seems to be a running theme in its history.  It spans across racial/cultural (blacks and Native Americans), religious (witch trials), and political (Communism) realms from its earliest days.  This is a dramatization of one of those instances against an atheist, Madelyn Murray O’Hair, (Leo) that occurred in the 1990’s.  It should be said at the outset that most people saw the woman as difficult—and the film shows this very well. We see Madelyn first as a young woman living at home in a contentious relationship with her Baptist father.  Each would try to out-curse the other in expressing their antipathy toward the other.  We only see this when she is already grown, so do not know what circumstances brought her to such a rebellious attitude toward religion.
She was apparently difficult to handle from childhood, and when the film opens to a family meal, we learn that she has had an illegitimate child and is pregnant with another.  Her explanation is that the fathers abandoned her, reaffirming her low opinion of men in general.  On the other hand, she appears to be devoted to her children, albeit in rather controlling and demanding ways, which comes back to haunt her later.
As O’Hair continues to fight for her children’s rights at school (their Constitutional right of free speech and religious freedom), she is successful in getting laws passed to that effect, but this is at great cost to her and her children.  Hatred is expressed toward them for years, including death threats, so when they go missing in 1995, no one seems to care.  Moreover, the police and some of Madelyn’s acquaintances are suspicious that she is simply repeating earlier stunts of purposely disappearing and turning up later.
This time is different, though, because, reasons her live-in assistant Roy Collier, her door is not locked, her dogs are left untended, her passports are found in a drawer, and breakfast is still on the table.  At this time, O’Hair has moved to San Antonio, Texas, and established the American Atheist Center, another move that brought more ill will from the predominantly Christian community.
When a local reporter, Jack Ferguson, hears about the situation, he contacts Billy, O’Hair’s estranged son, and Roy.  When he is persistent with his editor in getting permission to pursue the story and gather relevant data, he finds that rather than hatred, the motivation to kidnap O’Hair, her younger son, and granddaughter who lived with her, is greed, someone like David Waters wanting a share of donations to the Center.
The film, written and directed by Tommy O’Haver, is an objective account of a significant, colorful figure in America’s history who garners little approbation for her political efforts, despite their far-reaching implications and the substance of which, the majority of contemporary Americans would ascribe to.  Although the film is a timely resurfacing of the issues, it may not garner much support for  O’Hair herself, partly because of the current religio-political divide, but in part simply because of her abrasive personality. The production could have been improved by giving us more insight into how she developed her atheistic beliefs early on in her life.
In sum,The Most Hated Woman in America is a timely and helpful account of the woman behind two important landmarks in American history that reinforce our basic human rights.  Melissa Leo is up to her standard fine performance, along with an excellent supporting cast, particularly Josh Hartnett, Adam Scott, and Brandon Mychal Smith.

A timely reminder of how two of our basic rights were guaranteed by the untiring efforts of a complex, divisive figure in American history.