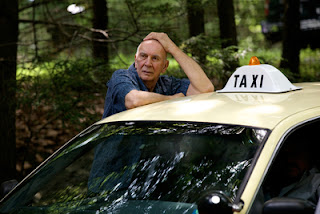 Ray Engersol (Langella) has received bad news from his doctor and as a retired physician and friend of his pals who have passed on, he knows what is ahead, and decides on his own to make the trip to Oregon where medical aid in dying is legal.  One of the film’s primary assets is the portrayal of family members’ reactions to his announcement, and how the crisis interplays with other disturbing life events going on at the time.  Ray’s daughter Kate (Applegate) is the one experiencing the strongest negative reaction, and she is hysterical in arguing against her father’s decision.  Ray’s wife Estelle (Place) reflects the weariness of a long-term caregiver (Ray has a history of heart disease) who has spent most of her life deferring to her husband.  Kate’s husband Brian (Crudup) is often caught in the middle between his wife and others in a conflict, and he does make the sensible decision to drive Ray from New York to Oregon for an appointment he has made.  Kate is at first bound and determined to do it herself, but her daughter has precipitated a crisis, so it’s best for her to stay home.
It’s a relief for the viewer when en route to Oregon, Ray, Brian, and Estelle decide to stop and see the Engersols’ estranged son Danny (Lucas) and Brian’s college-age son Nick (Shaffer).  Both sons are loathe to see their family, but when they learn all the facts about the reason for the trip, they help mitigate conflicts and join the caravan.  A big mistake of Ray is his withholding medical information from his family that would help them understand and empathize with his position.  When he finally confides in Danny, it makes a huge difference in his attitude.  I hope families viewing Youth in Oregon will take note in case they’re ever in this situation.  Knowing about the seriousness of illness is essential to being able to accept such a momentous decision.
This is Joel David Moore’s first time directing a feature-length film on his own, and the script is Andrew Eisen’s first screenplay, so the quality of the filmmaking is impressive, including Joel P. West’s mood-capturing music and Ross Riege’s inventive and beautifully colored cinematography.  The story and depiction of the characters are realistically presented with the complexities often found in modern-day families.   When I worked at a cancer center, I was often struck by the number of instances in which families have additional crises in their lives that they have to deal with—cancer is only one of other crises, such as alcoholism, drug dependency, house fires, and acting-out children.  The filmmakers here seem to know that well enough to include it.
Frank Langella’s astute portrayal of an older man who has always been in control of his life and his dogged pursuit of his goals steers the movement of the story and keeps its focus in the face of tremendous emotional resistance.  Billy Crudup reflects well the miseries of his character torn by various pressures and trying to accommodate his wife’s frequent instruction to “Do something!”  Christina Applegate is adept in modulating her performance across different roles—nurturing, supportive mother and horrified, scolding mother; loving wife and goading wife and daughter.  Josh Lucas’ subtle portrait of an estranged son with long-standing conflicts with his father instantly moving to an understanding, supportive stance toward him is very well done.  The young actors Nicola Peltz and Alex Shaffer depict the essence of normal teenage efforts to separate from their parents.  Mary Kay Place’s character is one that seems beaten down and turning to crutches to help her along, and Place accomplishes that to a tee.
The title of the film puzzled me, but I read that “Youth” is a play on the word ‘euthanasia’—rather lame, if that is true, especially since a knowledgeable friend of mine (Cindy Merrill, Co-founder of Texas Death with Dignity and local advocate for the Death with Dignity National Center) pointed out that euthanasia is illegal in every state.  Oregon and five other states allow what is termed 'medical aid dying' and 'physician assisted dying'.
Youth in Oregon is especially helpful in demonstrating the steps in physician-assisted dying in a neutral setting with characters we haven’t become emotionally attached to—presumably to help us be more objective in confronting such a sensitive topic.  The filmmakers keep the viewer guessing as to exactly how the story will conclude until the very end.

Youth in Oregon is a sensitive exploration of the controversial topic of physician-assisted suicide and one family’s variable reactions when confronted with it.