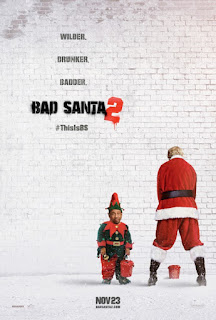 The perverse filmmakers must have had an uproarious time indulging themselves in a buffet of non-PC barbs, images, and insults in Bad Santa 2.  If all the obscenities and lewd remarks were removed from the dialog, there would hardly be a script—except, of course, for dear Thurman’s (Kelly) lines.  He manages to give even the crusty, hardened Willie (Thornton) pause, and the possibility for redemption.
Filmgoers should be aware that this is a justifiably R-rated film showing risky sex, violence, crime, and alcoholism—and does not necessarily speak against it.  Willie’s mother-from-hell (Bates), whom he despises, has manipulated him back into her sphere by using Marcus (Cox) to tempt him with a $2million job.  Of course, these three cannot be in the same room together more than five minutes before they’re at each other’s throats and spouting every obscene threat that comes into their pathetic minds.
The setting for their non-PC operations is a Christmas charity run by the Hastings (Hendricks and Hanson), where they are dressed in Santa costumes.  It is true that the Hastings are not really admirable, but c’mon, a robbery of a charity with Santa drinking alcohol and using offensive language with the kids??  This makes me want to limit the Constitutional Amendment for free speech.
Bad Santa 2 is meaningless, without any scrap of redeeming quality.  Even the one cheery character, Thurman, is portrayed as dimwitted, and persists even after plain good sense should tell him not to continue his pursuit of Willie as “family.”  We see no cleverness in the jokes or in the plans for the robbery (turn out the lights, open the safe, escape through the garbage chute—which is fitting).  We see the expected end result, including a slightly sheepish Willie making a turn…oh no, not making a turn.

Tell me you don’t want to see this movie.