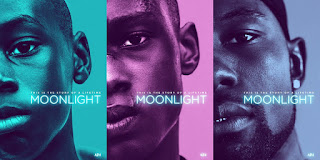 This is an artfully rendered film in which the viewer participates by filling in details that are omitted from the storyline, which proceeds from the main character’s childhood to adulthood.  Little/Black/Chiron is the character named differently, depending on his age and the section of the movie.  (The three very fine actors are Alex Hibbert, Ashton Sanders, and Trevante Rhodes.)  Little is picked on as a child because he’s not “hard”; he gets bullied and teased for being a “faggot”, and rarely stands up for himself.  His only friend Kevin (Jadon Piner, Andre Holland, Jharrel Jerome) tries to help him by telling him to fight back, but even in high school, he remains passive.  He’s a boy/man of few words, although the considerable turbulence inside shows on his face to an astute observer.
When a kind-hearted drug dealer Juan (Ali) finds Little in a “drug hole”, he makes an effort to befriend him, find out where he lives, and who his parents are.  But Little is mostly mute, and it takes Juan’s girlfriend Teresa (Monae) to draw him out enough to find out where he lives.  When Juan takes him home, much is gradually revealed, and we begin to sort out the relationships in the community and why Little’s life is so hard.  We see Juan taking him under his wing, realizing he needs a father figure (which shows up later when Chiron adopts the appearance and occupation of this most important man in his life).
The switching of actors (three for Chiron and three for Kevin) makes following the story a bit difficult, especially since Chiron says so little, but the actors are so skilled it doesn’t take long to sort it out.  The pace of the film and Chiron’s reticence is skillful in eliciting our empathy, and will hopefully have the effect of helping more of us understand and have sympathy for those caught up in the drug culture in poorer neighborhoods and the trials that gay people undergo even at a young age.  This is a picture of a segment of society that few of us have seen so tenderly portrayed.
Co-writer with Terell McCraney, director Barry Jenkins has created a portrait of a boy and his milieu that is evocative while being so quiet, eloquent while making the main character Chiron so mute, and heartwarming in its highlights of kindnesses shown toward Chiron.  Its style and form seem groundbreaking to me.
An Impressionist painting of a gay child growing up in a black drug culture that elicits our empathy and sympathy.