THE AGE OF SHADOWS 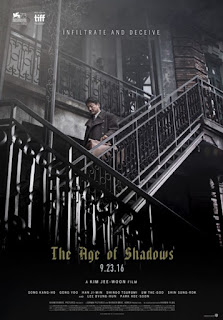 Pitting the Korean resistance fighters against the Japanese occupiers in the 1920’s, The Age of Shadows illustrates the fine art of double-dealing and the tenacious persistence of committed people thwarting outside rule.  It can be difficult for English speakers in the first part of the film to sort out who the players are, but once you have an idea about who’s who, you can distinguish faces rather than names.  (Although it became confusing again when I found that different online sources don’t agree with which are first names and which are last names of the director and cast.  For this review, I went with the credits listed in the film.)
The central character Lee Jung-Chool (Kang-ho) is a Korean captain who is currently on the Japanese police force, having sold out his fellow resisters previously.  Yet, he also seems at times to be helping the resistance, which is led by Kim Woo-Jin (Yoo).  Their relationship is not really clear until the very end.  Jung-Chool has been charged by his superiors, Hashimoto (Um) and Higashi (Tsurumi), to infiltrate the resistance to bring them all to justice.  The tension heightens when the main resistance fighters and police are all spying on each other while on a train transporting explosives.  This is a finely choreographed, bloody sequence that is hard to track with its numerous players.
Divided loyalties and the bind that creates is the essence of the film, which makes Jung-Chool the central character, involved in most of the planning meetings on both sides and the frequent gunfire.  South Korean writer-director Kim Jee-woon (The Good, the Bad, the Weird, Doomsday Book, I Saw the Devil) has created a spy thriller with brilliant complications (the followers also become the followed), changing loyalties, and ever-present sense of danger.
The most entertaining sequences are watching Jung-Chool and Woo-Jin doing their dance of negotiations.  Woo-Jin keeps the pressure on Jung-Chool to keep up his aid to the resistance or else be exposed to his superiors.