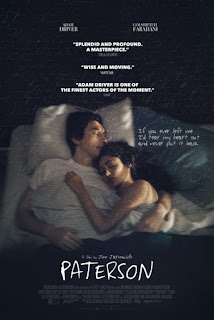 Paterson the movie is Jim Jarmusch’s homage to the 20th Century American poet William Carlos Williams, who wrote a five-volume poem entitled “Paterson.”  Although the poet was born in and lived in Rutherford, NJ, his poem and the film are both set in Paterson, NJ.  To continue the theme, the film’s main character is named Paterson, a young bus driver who writes poems in his spare time.  Williams favored poetry in the “documentary” style that reflects the resemblance between the mind of man and the city [Beach, Christopher (2003). The Cambridge introduction to twentieth-century American poetry (1st publ. ed.). Cambridge: Cambridge UP. pp. 109–16. ISBN 9780521891493], which draws on everyday events in the lives of common people.  In his screenplay, Jarmush has Paterson writing and reciting poems reflective of Williams’ poetic style, which is, for example, making the subject of a poem a box of matches, with its significance in the couple’s home.
Adam Driver captures the Paterson persona in its gentleness, selflessness, and willingness to please, along with a commitment to routine in daily life and a serious sense of responsibility.  He dismisses his worth—even after a demonstration of heroism—and shows no sign of hostility or resentment.  In pleasing contrast, Adam is married to blithe, winsome Laura (Farahani), who is wildly creative in her passion for black and white circles and stripes (appearing on clothes, curtains, napkins, cups, and even iced muffins); she is hilarious and lovingly sweet at the same time.  How refreshing to see a couple in the movies so compatible and free of conflict.  They both delight in indulging one another.  The two actors fit hand-in-glove in their roles.
Paterson is an amiable film whose spice comes from the poetry, from the quirkiness of its characters, and from the little Jarmusch jokes sprinkled generously throughout.  For some reason, he makes seeing Paterson’s routine of waking up at the same time every day, eating his Cheerios, driving his bus, taking the dog Marvin on a walk, and stopping at a bar interesting.  That’s because along the way, we see all the figures he encounters with their daily life dramas that make us chuckle but also make us care about them. This is humanity at its most genuine and sympathetic.
Somewhat puzzling is the motif of twins in the film; we see six different sets of twins, and Laura tells Paterson about her dream in which she was pregnant with twins.  “One for each of us”, replies Paterson.  Hence, I assume the motif has something to do with balance, and considering the contrasting personalities of the couple, perhaps it suggests the achievement of harmony in their relationship—that differences do not necessarily have to be in conflict.
Toward the end of the film, Paterson encounters a Japanese gentleman in the Paterson Falls park.  A number of coincidental exchanges occur, at the end of which, the gentleman parts with the expression, “Aha!”  I hope all viewers have this same thought after viewing this film.

A gentle, poetic, and warmly humorous look at a slice of humanity.