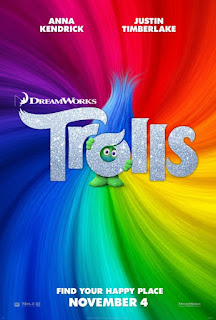 I think kids will really take to this animation with simple messages that will be meaningful to them, delivered in eye-catching, colorful visual effects.  The message is basically pitting “look on the bright side of life” against “look out; they’re out to get you.”  And further, that true happiness is inside all of us; it’s up to us to find it.  The film also demonstrates that making friends of enemies is ultimately life-saving.
The story is that the Trolls are too exuberant with their singing, dancing, and hugs which are put forth by King Peppy (Tambor) and his daughter Poppy (Kendrick).  For good reason, which we find out why later, Poppy’s friend Branch (Timberlake) turns away from what he sees is nonsense and further endangers the Trolls because their loud parties inform the Bergens of their whereabouts.  Bergens are dour beings who are huge grouches, convinced that eating Trolls is the only way they can be happy.
Despite Branch’s warnings, the Bergen king’s chef (Baransky) who has been banished because she hasn’t served Trolls for 20 years sees and hears the partygoers and manages to grab a half dozen of them to take back to King Gristle (Mintz-Plasse), thereby getting back into his good graces.  King Gristle is too young to have ever tasted Troll happiness and was told by his father (Cleese) that he never would.  Her bounty certainly does get her forgiven, and she is gleeful with her newly regained power.
Meanwhile, Poppy feels guilty about not listening to Branch’s warning, and feels responsible for the Trolls that got into the Chef’s hands.  The Troll mantra, “No Troll left behind”, prompts her to go to the land of the Bergens and rescue her friends.  At first, Branch refuses to go with her, but does show up on the trail, knowing that Poppy will need his help.  Most of the rest of the film is about their ruses and adventures in rescuing the prisoners, which involves making friends with the scullery maid Bridget (Deschanel) and doing a little matchmaking.
The soundtrack has a number of original songs, the most important being “Can’t Stop the Feeling” by Justin Timberlake (who served as music producer), which won Best Song from the Hollywood Film Awards.  The singers include Timberlake, Anna Kendrick, Zooey Deshanel, Gwen Stefani, and James Cordon along with others.  Paul Simon’s “The Sound of Silence” is inserted during a key moment, drawing chuckles from the audience.  The original score is by Christophe Beck.
Cinematographer Young Duk Jhun, who has had experience with visual effects (The Croods, Monsters vs. Aliens, and Over the Hedge) is joined by the Production, Art, Visual Effects, and Animation artists to create a beautifully rendered show, brought together by Co-directors Mike Mitchell and Walt Dohm (with previous contributions to Shrek and SpongeBob SquarePants films).  The ways in which the Trolls use their hair is definitely clever sometimes humorous, and part of the fascination in Trolls.

Although not a groundbreaker, the music, visual and special effects, and heartwarming messages, gives Trolls high entertainment value, particularly for young children.

Posted by donnarcopeland at 2:26 PM