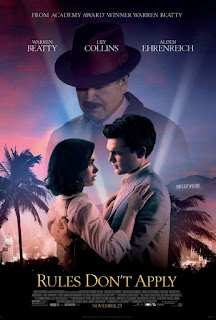 “It’s about sex and romance in the old Hollywood”, Warren Beatty (director and co-writer with Bo Goldman) says of his comeback movie, Rules don’t Apply.  “…and about American Puritanism”, he adds.  Hughes was someone who didn’t have to follow rules because he was a billionaire; we see the influence of Hollywood (where rules don’t necessarily apply) on him and, through him, on the people who worked for him.  When he saw Howard Hughes briefly in the 70’s, Beatty stayed fascinated with him, and although he began conceiving the film in the late ‘90’s, it took 20 years to bring it to fruition.  It’s not a biopic, but rather a take-off from Hughes’ reputation and creating a drama from that.  I liked it for its harking back to older Hollywood films in which storytelling is prominent and meant to be inspiring.
Marla Mabrey (perfectly cast Lily Collins) is a young woman from Virginia who has turned away a scholarship to try her luck in Hollywood, and has been invited to a Howard Hughes audition.  She is accompanied by her mother, cheeky Lucy Mabrey (Bening), who soon becomes impatient with the Hollywood/Hughes slow tempo and goes back home.
Much is made of Marla’s Baptist background, and when her Hughes driver Frank (Ehrenreich) informs Marla and her mother that he is a Methodist, we see them connect.  Complications ensue when Marla and Frank have a kind of pheromone-like attraction to one another.  Keep in mind that it is strictly forbidden for any of the Hughes employees to socialize with any of his 20+ starlets.  Breaking this rule will cost them their job.  Of course, this is an unenforceable rule, but Hughes has the illusion that he is keeping tabs on everyone, and he has no qualms about the way he gets information.
The story then alternates between Hughes’ business activities and a couple of romances.  Humor is sprinkled occasionally into the drama, such as the starlets getting their weekly paychecks in envelopes sent down from a second story window on a string.  Hughes was known for his secretiveness, and the film spoofs this by having him constantly refuse to meet with people.  The issue becomes so heated, rumors circulate about his mental stability, and he has to ward off those who think he should be declared insane.  There is a curious disconnect between Hughes much of the time looking a bit senile, but at the end showing a sharp memory and being able to rattle off complicated business analyses and plans.
Beatty as the star demonstrates again his acting skills, and in this role he’s portraying an eccentric older man who alternates between sounding demented and relaying complex information about his projects.  His directing skills are apparent in the pace and composition of scenes in moving the story along.  He was canny in his casting two up-and-coming actors, Lily Collins and Alden Ehrenreich, for the young couple who attend church and say the blessing before meals and then get caught up in the Hollywood lifestyle.
Caleb Deschanel is a known master of cinematography, and his talent and experience are apparent in scenes of the Los Angeles city- and landscape, the grounds where Hughes resides, and the mysterious door in dark shadow out of which Hughes slowly emerges when he does finally deem to meet someone.  Those “someones” are usually a part of Hughes’ staff whose jobs are always tenuous, but there are others too.  This allows for many interesting cameos from Alec Baldwin, Matthew Broderick, Martin Sheen, Annette Bening, Ed Harris, Oliver Platt, Candace Bergen, and Steve Coogan.
Not much is new here, but some older viewers nostalgic about old Hollywood days may enjoy Rules Don’t Apply; it’s not likely younger viewers will, however.

A reminiscence of Howard Hughes and Hollywood in the 1950’s.

Posted by donnarcopeland at 3:57 PM