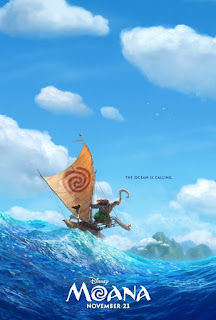 This magical, musical animation from Disney incorporates folklore and myth to tell a story about identity with reverence for history and the preservation of the world.  It’s a hero’s—actually, a heroine’s—journey where she must go out into the world far beyond her safe island and undergo many trials to save her people and their land.  The sea has called upon her to do this, and she is encouraged to go by her old grandmother, who knows all the old tales about the island.  The most important one has to do with an island goddess who was life-giving and created many islands in the sea.  But competitors wanted her life-giving powers.  One of these rogues was Maui (Johnson), a trickster and shape shifter with a magic fishhook; he stole her heart where the life-giving powers resided, and ran away with it.  Unfortunately, for him, he encountered his own enemies, one of which takes his magic fishhook away from him.
Moana (Cravalho) is the daughter of Chief Tui on the island of Motunui where she will succeed her father as chief eventually.  Because of a past bruising experience, Chief Tui orders everyone to remain on their safe island and not venture out beyond the reef.  But when the coconuts begin to dry up and turn black inside and the fish start disappearing when Moana is a teenager, she begs her father to allow her to go beyond the reef where there will be more fish.  He adamantly says “No.”
Now, Grandmother Tala is rather mischievous as well as wise, and she knows a way for Moana to get a boat on her own and defy her father.  (This is just one of the many points made in the film about females needing to be strong and not necessarily heed a male superior.)  So this is just the beginning of our heroine’s journey; she must find the demigod Maui and persuade him to help her retrieve his sword and return the heart (which was given to her by her grandmother) to its rightful owner, thereby saving their island.
The unlikely pair (he’s a blustering chauvinist and she is feisty and competitive) set off quarreling—he tries to ditch her several times.  But they always end up working together when they encounter pirates, a lava monster, and a crab that glitters to retrieve what belongs to them.  The ocean will help with its special powers to return a favor to Moana, who aided it many years before.
The story is exciting and humor is sprinkled in throughout.  For instance, there is a pet rooster called Heihei who has a liking for rocks which it swallows then coughs up and who insists on traveling in Moana’s boat, despite the fact it can’t swim.  The ocean has a way of rising up in a cone-like form to deliver things to Moana (once it high-fives her) or it speeds her or Maui through the water like a speedboat and tosses them—splat!—back on the boat.  These and other scenes had the kids and me laughing out loud.
The animation is absolutely beautiful and is accompanied by music and song that reminds of a Broadway show, with a mix of Polynesian and other music genres.  Composers are Lin-Manuel Miranda, Opetaia Foa’i, and Mark Mancina.  The two directors (Ron Clements and John Musker) and co-directors (Don Hall and Chris Williams) are to be congratulated with their cast and crew for such a fantastic production.  The story has substance with fine messages for children, e.g., “Listen to the voices inside you to know who you are” and a nonrestrictive role model for girls.  Boys should love it just as much, with its strong male figures and the kind-hearted Maui.

Moana:  Animation and music for all ages.