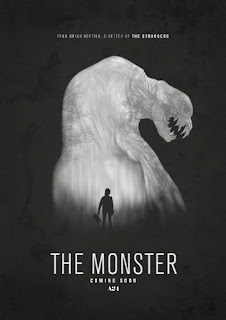 This is pretty standard horror fare by Bryan Bertino, writer/director, about a mother-daughter pair with major conflicts.  Lizzy (Ballentine) wants to go visit her father, and her mother Kathy (Kazan) agrees to take her, but she’s been up late (apparently drinking, from all the bottles left behind that Lizzy gamely clears up and washes the dishes), and doesn’t get up until the evening.  Hence, they start off hours later than planned and are on the road after dark.
Kathy is a terrible driver, and in a rainstorm hits an animal, which disables the car.  They call 911, which sends an ambulance and a tow truck, but since there has been an accident, the ambulance is delayed.  The driver of the truck realizes that before he can tow the car, he has to fix the axle underneath.  While he is working—with rain pouring down the whole time—mysterious sounds are heard and he goes to investigate.
Lizzy has argued with her mother about the existence of monsters, but Kathy brushes her off, saying monsters are not real.  She has to take that back later, after there is disappearance after disappearance of their rescuers who’ve come one by one to help them.
This film has the problem that I see in many horror films—that people do stupid things that stretch my sense of reality.  Kathy wrecks not just one car; she wrecks two.  People go out in the woods in the dark armed only with a flashlight.  Poor plans are made to retrieve a cell phone, make escape plans, etc.
The depictions of the mother-daughter conflicts and the actresses playing them are good and convincing.  Without actually stating what the problems are, we are able to infer the history.  The pacing and special effects are to Bertino’s and his crew’s credit, and the music by tomandandy is appropriately scary and beautiful.

Aficionados of the horror genre are likely to buy into The Monster.