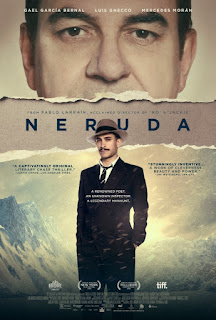 Neruda is not a bio-pic, but a satire that is inspired by his life in the mid-1940s when a warrant was issued for his arrest for being a Communist by Chilean President Gonzalez Videla, who had outlawed the political party.  To avoid arrest, Neruda and his wife went underground.  Director Pablo Larrain and his screenwriter Guillermo Calderon are most interested in Neruda’s impact on his country and its art and politics.  The opening scenes of the picture with Neruda and government officials arguing about politics in a men’s restroom (lavishly decorated with works of art) introduces the absurdities to follow.
Pablo Neruda was a Nobel Prize winning poet and diplomat in Chile during the early part of the twentieth century.  He also served as senator for the Chilean Communist Party.  With the government on his tail, Neruda went into hiding and finally escaped to Argentina.  He later returned to Chile at the request of socialist President Salvadore Allende to be his policy advisor.
In the film, Neruda (Luis Gnecco) is portrayed as an overweight, temperamental poet beloved by the people.   He has grown up well cared for, and when he goes on the run, he and his well-to-do wife Delia (Moran) are forced to confront how ordinary people live, which is stressful for them.  The fact that they are Communists gives this an ironic twist.
In an extraordinary sleight of filmmaking, the writer made Neruda’s pursuer to be a “vainglorious” police detective who desperately wants it to be true that he is the descendant of the locally famous chief of police, Oscar Peluchonneau.  His mother was a prostitute, but Oscar thinks he looks like the statue of the older man, ergo…  He (played hilariously by gifted Bernal) is a fan of detective stories, so creates his image from storybook characters, full of swagger, insouciance, and a keen nose for clues.  The narration calls him “a phantom in a uniform.”  In his love of risk and penchant for thumbing his nose at authority, Neruda periodically leaves behind a detective book for Oscar to discover, one that Oscar just cannot resist reading.  But he remains confident that he will not be a supporting figure in this drama; he will be the hero.  It galls him to think that it is actually Neruda creating him.
Political references and caricatures abound in this highly entertaining story, such as “[the government and police] want to hunt for Neruda, but not to catch him”, for that would spark rebellion in the people.  Reality and fiction, art and politics combine to get across the essence of Neruda’s contribution and what he was about, as opposed to a collection of facts about him.  Right up through the concluding scenes marked by the hunter and his prey slogging through waist-deep snow in the Andes, intrigue, humor, and political commentary keep us engaged and thoughtful, just as we are upon reading a brilliant, insightful poem.

Posted by donnarcopeland at 3:26 PM