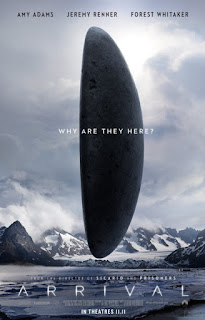 When Dr. Louise Banks (Adams) opens the film with musings about beginnings, endings, and time, it’s a clue about the construction of the story to follow.  And after a few scenes with Louise and her daughter, we hear about 12 alien spaceships that have landed around the world, one of which is in Montana where Louise lives.  That evening, there is a knock at the door, and Colonel Weber (Whitaker) tells her that based on her previous translation for the US government, they would like for her to translate a recording of a conversation with the aliens.  She responds that a recording is insufficient; she would need to see the speakers in person.
So she is eventually flown with Ian Donnelly (Renner), a theoretical physicist, to the site, where they are charged with deciphering what the aliens seem to be saying.  Keep in mind that there are 11 other sites in the world where other governments are doing the same thing, in countries like China, Russia, and Pakistan.  Already, the U.S. media is firing up fears of the populace about the aliens, and the governments—including ours—are quick to worry about security and take a defensive-ready stance in case there is an invasion.  It never occurs to them that the heptapods may be contacting humanity for some other reason.
The film makes good social commentary about fear of strangers and how quick some are to jump to conclusions based on few facts, and stand ready with finger on the trigger.  One paranoid voice (on talk-radio, for instance) can prompt domino-effect action among people and governments around the world.  Louise’s valiant attempts to reason and make scientific inquiries before taking such action is like a voice crying in the wilderness.  She holds our attention as we wait breathlessly to see how the story will turn out.
Director Denis Villeneuve (Sicario, Enemy, Prisoners, Incendies) has made previous sage commentary about human impulsivity, action with incomplete information, questionable motivations, and doggedness in searching for the truth, and this film measures up to his previous work in suspense and human dramas with which we can all identify.  The music of composer Johann Johannson enhances the drama, being eerily modern or beautifully symphonic, depending on the scene, and Bradford Young’s cinematography makes some scenes memorable purely for their composition and beauty, as when we see the upright mystical spaceship for the first time surrounded by textured clouds.
Amy Adams pretty much carries this film with her intense visualizations, painstaking work through problems, and emotional accessibility.  It’s too bad that her heavy breathing—meant to show anxiety perhaps?—was so predominant in such a strong figure.  She sounded like Darth Vader; whereas none of the men were heard doing this.  I am also a bit curious about Jeremy Renner’s role; so much of the time his character is just standing around or asking Louise how she is.  I think that’s a shame, both because the actor seems wasted in this characterization and because I would think a physicist would have a much more active role in hypothesizing and in advising government officials.  (You’d probably never find the current physicist Neil DeGrasse Tyson adopting such a passive role!)
I very much enjoyed the characterization of Louise as something of a seer who could see into the future but had elected not to try to affect it in any way.  It’s the kind of acceptance that would be beneficial in many of our human struggles.

This is a different kind of action film, one that deals with universal issues with slower paced, scientific measure.

Posted by donnarcopeland at 2:29 PM